skip to main | skip to sidebar

Squad Temior on Phallus IV during an ion storm
Posted by Septic at 07:07 No comments:

Relic Bearer Velomus
Originally uploaded by Murtogan Het
Velomus is an expert with the bolter, he is only slightly more accurate than his his brothers, but knows every intimacy of the Astartes' trademark weapon. He understands that well placed and dispersed target elimination can make ten kills cause a hundred foes to flee. He has perfected ammunition consumption such that he somehow always has a full magazine when one is needed.
Posted by Septic at 05:34 No comments:

Relic Bearer Temadyl
Originally uploaded by Murtogan Het
Relic Bearer Temadyl only became a space marine at the age of 34, usually too old for the transformation, however the bio magos found that he was in a fit physical state and he was an incredible warrior even as a mere human, so the operation was authorised.
He only just made it. The medical complications were immense, a normal human would have died, but not he. Now a taught skinned wreck of a man, battle brother Temadyl fights with the fervour of one trying to attone for a percieved failure. Such is his Rage that the Chaplaincy have been exceeding their jurisdiction to investigate his mental state.
Posted by Septic at 05:24 No comments:

Relic Bearer Cassius
Originally uploaded by Murtogan Het
Despite being a warrior above all things brother Cassius also has a Penchant for poetry, and in his two hundred and twenty year service he has filled many a book with devotional scripture for the Grand Library on Honous. He bears his finest work on his shoulder pad, and often recites it to his brother before battle.
Posted by Septic at 05:10 No comments:

Relic Bearer Aleyxus
Originally uploaded by Murtogan Het
Relic Bearer Aleyxus considers it his duty to safeguard his brother's faith in lieu of a Chaplain. In the Macabre interior of the Lodge's Razorback before battle, Aleyxus soothes the rest of the lodge into a calm and meditative state, as they contemplate the battle ahead. In this state Guardians of the casket go to war, with steely resolve and inhibited rage.
Posted by Septic at 05:02 No comments:

Lodge Master Temior
Originally uploaded by Murtogan Het
Lodge Master Temior replaced Lodge master Menimon after his death in the Greevston Campaign against the Tyranids. After inheriting his predecessor and mentor's title Temior engaged a brood of synapse creatures to reclaim Menimon's armour, although his biomass had already been harvested.
The armour now stands in the hall of heroes on Honous, but Lodge Master Temior wields The blades from Menimon's lightning claw on his bolter as a mark of respect.
Posted by Septic at 04:52 No comments:

Guardians Of the Casket
In the Bloodbane space marine legion the exists a number of warrior lodges which are endorsed by the Master. The three largest of these are permitted to select fifteen warriors to act outside of the general organisation of the legion and form part of the Second, or Champion's company. The Guardians of the casket bear in to battle the casket containing the seven thousand year old ashes of the entire third company who were incinerated by their own treacherous Captain, as the Daemon that he had allowed into his soul were released and rampaged through the third company's strike cruiser, Daedalus, killing all on board. It took the entire Bloodbane Librarium and three companies to cleanse Daedalus of foul Chaos taint.
Posted by Septic at 04:07 No comments: 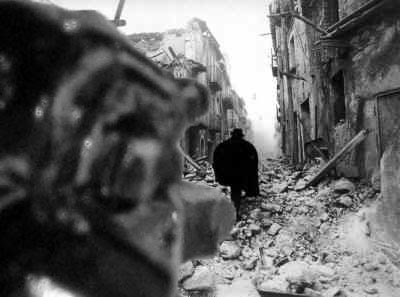 "May the Emporor guide my round"
Posted by Septic at 14:05 No comments: 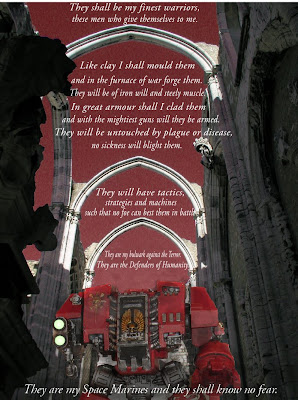 A piece of of inspirational Art I made for when the grey and black ranks ov plastic are getting me down.
Posted by Septic at 15:13 No comments: